Steak Revolution is reader-supported. When you buy through a link on this page, we may earn an affiliate commission. Learn more.

In the sizzling documentary Steak (R)evolution, French first-time director and beef connoisseur Franck Ribiere embarks on a journey across the world to find the best beef steak and answer the questions that have been haunting him since he tried the famous porterhouse steak at Peter Luger Steak House in the Williamsburg section of Brooklyn, New York.

That experience opened his eyes in terms of the way a steak should taste and left him wondering what it takes to produce a perfect steak.

Coming from cattle-breeding family history, Ribiere is a novice in the field, albeit one with a healthy appetite for learning and seeking answers. Keeping him level and offering the expert angle is his partner in crime, an elite butcher from Paris, Yves-Marie Le Bourdonnec.

The duo starts a journey that will take them from the ever-secretive Kobe beef farms of Japan to Angus County in Scotland and the Pampas of Argentina.

About the Steak (R)evolution

The central premise of the film lies in the realization that the ultimate steak experience, the Holy Grail of beef indulgence, depends at least as much on the quality of the beef as it does on the culinary expertise of the chefs who are preparing it. A common theme that appears in the movie is that the quality and the source of the meat play vital roles in the end product that the world’s best eateries are putting on the plates of hungry customers like Riviere.

Many vegetarians and animal rights activists will find it hard to indulge in this kind of movie, knowing of the sad truth connected with the mass meat production in the developed world. Still, Steak (R)evolution manages to tread a fine line in marveling at the end product and pointing out the ethical dilemmas embedded in the production methods.

In that sense, Riviere shares a strong message that producing the best beef in the world is in direct correlation with the amount of love and care for the animals the meat producers are putting in. It certainly romanticizes the connection between the man and the animal and tries to take us back to simpler times where the bond between an animal, as a source of food, and a man, as the consumer, included much more respect and care. 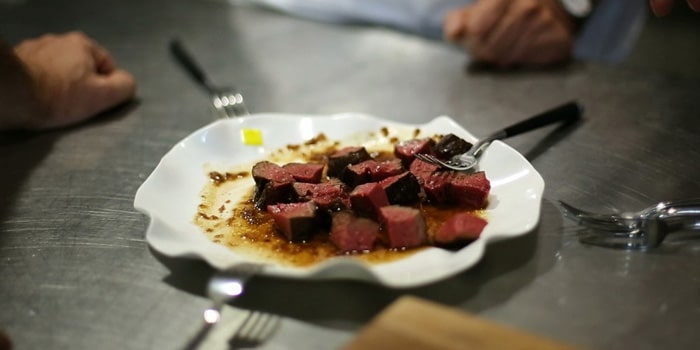 This revelation pushes the documentary to showcase a new approach to producing beef being adopted across the globe. Enthusiasts from Sweden to the United States are investing in farms where animal care and treatment are at the center of producing high-quality meat that will find its way to the tables of the world’s most famous restaurants.

Unfortunately, the journey omits crucial factors in this farm-to-table approach, and those factors are the slaughterhouses. Certainly, there is an intent in keeping this controversial aspect of beef production out of the film, but not necessarily for nefarious reasons. The author and his production company regularly produce movies that do not skimp on goriness, but Steak (R)evolution decides not to go there.

Ultimately, Steak (R)evolution is an imperfect documentary about a quest for a perfect bite of steak – one man’s vision of a connection between the tasty meal and the animals who provide it.

The documentary is currently available on major streaming platforms such as Netflix, iTunes, and Amazon Prime Video.

How to Cook a Tomahawk Steak